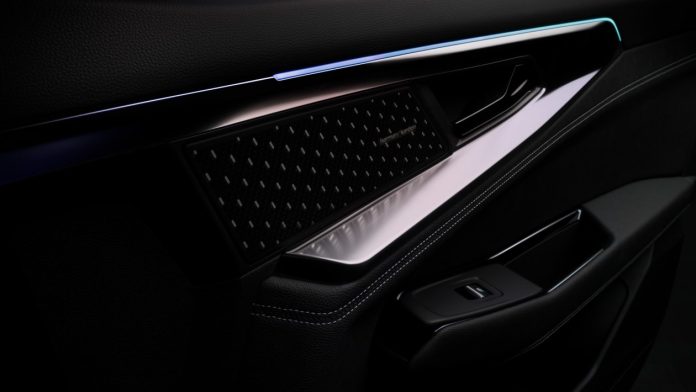 Renault is readying itself for the launch of the new Austral SUV. It’ll go on sale in Europe and the UK later this year as a replacement for the Kadjar, and these new official images offer our first glimpse at the production car’s interior.

Unlike the company’s previous interior teaser, these images are photographs rather than computer renders. As such, they provide a more detailed look at the materials Renault will use in the SUV’s cabin, as well as an overview of the Austral’s unusual centre console.

The dashboard features faux-wood trim and a broad air vent that spans the width of the passenger seat. There’s also an ambient lighting system that features light bars running across the top of the dash panel and around key trim pieces such as the door handles.

The images also provide a closer look at the SUV’s modular centre console, which Renault says was “inspired by the worlds of aeroplanes and fine watchmaking”. It features a sliding hand rest that can be pushed fore and aft to reveal either a wireless smartphone charger or a large storage bin with cupholders.

Renault’s recent render allows us to piece together the rest of the Austral’s cabin design. On the technology front, there will be a 12.3-inch digital instrument cluster that’s connected to a 12-inch portrait infotainment system.

The brand’s engineers call the new infotainment layout “OpenR,” and Renault says it’s one of the “biggest breakthroughs in on-board technology in the past several years”. The system is compatible with both Apple CarPlay and Android Auto – and it even includes a built-in Google search function and pre-installed support for Google Maps.

Renault has tried to make the most of the available space in the Austral’s cabin. For example, the body was designed without a central hump in the rear. That means the floor is flat, which improves foot space for passengers sitting in the middle seat. The rear bench can also slide back and forth to prioritise either boot space or rear leg room as required. The seat folds down completely with the press of a button in the boot.

Agneta Dahlgren, Renault Design Project Director, said: “When we created the Austral’s passenger compartment, the three recurring themes were the perception of space, edgy design and a protective feel – and all that is based on high standards of quality.”

More recently, Renault confirmed that the Austral was undergoing the final stages of its development programme, with the company’s engineers focussing on fine-tuning its engine range. As part of the announcement, the firm also released a couple of official “spy shots” which previewed the car’s styling.

A spokesman said: “The development is being completed with final checks of the new CMF-CD3 platform and the all-electric engine options.” In a rather frustrating fit of contradiction, though, Renault has confirmed that this statement referred to an all-electrified line-up of E-Tech hybrid and mild-hybrid-powered vehicles, and not a full EV version.

Between now and the Austral’s launch, a fleet of around 100 test cars and a team of 900 drivers will cover “confirmation runs” that will total a combined distance of 600,000km (around 373,000 miles) on the open road. The brand’s development programme will then see prototypes cover a further 1.4 million kilometres (870,000 miles) around test tracks.

Renault said: “These tests will enable the teams to approve the adjustments made to the new CMF-CD3 platform and driver assistance systems, as well as sound-proofing and the comfort of the suspension system so that customers can enjoy the best conditions possible.”

The Austral, which will rival the Ford Kuga, Nissan Qashqai and Volkswagen Tiguan, is expected to be unveiled in the latter part of 2022. Official prototype images from Renault show it will take plenty of design inspiration from Megane E-Tech electric hatchback.

Details such as the slim high-mounted LED headlamps, clamshell bonnet and curved front fascia appear to be direct carry-overs from the EV. The glasshouse is smaller than the Kadjar’s, but larger than the Megane E-Tech’s, which fits in with the Austral’s positioning as a taller, crossover-bodied version of the Megane.

Meanwhile, the rear of the prototype features a large version of Renault’s recently redesigned retro-inspired 2D badge in the centre of the tailgate. Other details include a sharply sloping rear window, slim tail-lights and a chunky lower bumper.

We’re previewed (above) how the new Austral SUV could ook once the camouflage wrap has been peeled off.