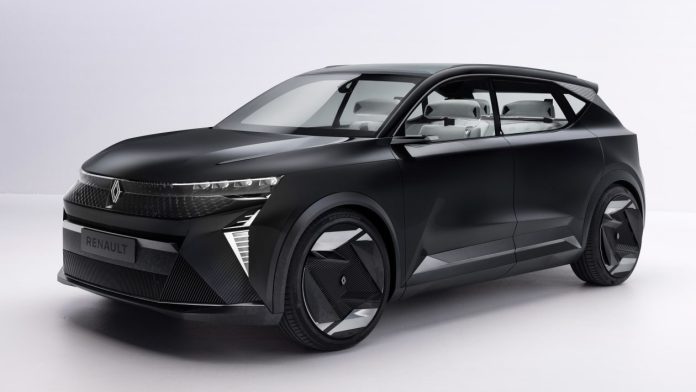 Renault has confirmed that it will reboot the Scenic name in 2024, applying its famous small MPV nameplate to a new family sized SUV. The new car will be all-electric, and is previewed by this: the Scenic Vision Concept.

Penned by lead designer Gilles Vidal, the Scenic Vision represents Renault’s future on three fronts. The exterior design is representative of what the 2024 Scenic will look like, and is “more than 90 per cent production car” according to Vidal. However, the powertrain technology is more a preview of what Renault thinks it could offer commercially post 2030, and the interior is pure concept car indulgence.

The Scenic Vision is not just a preview of what’s to come from Renault passenger cars in the future. It’s the brand flexing its eco credentials, showcasing what Renault claims are several breakthroughs in regards to sustainability in production. As such, the concept is made from 70 per cent recycled materials, and 95 per cent of the whole vehicle can be recycled at the end of its lifespan.

The Scenic name summons thoughts of peak MPV popularity in the 1990s. Launched as a smaller, five-seat sibling for the Espace in 1996, it was a surprise hit in showrooms, cementing the MPV as the car of the time. It’s a segment that has nosedived in recent years, however, and the Scenic name was taken off-sale in the UK in 2020 altogether.

When it returns in 2024, it will be attached to a C-segment SUV. The brand claims that it will carry forward the Scenic’s original brief, by being a car aimed at families and their “changing needs”.

The Scenic Vision uses a bespoke platform, but the 2024 production car will use the CMF-EV system employed by the smaller Megane E-Tech Electric and the larger Nissan Ariya. This will mean a fully-electric powertrain, with batteries up to 90kWh in size enabling a maximum range of over 300 miles on a full charge if the Ariya’s specs are anything to go by.

However, the powertrain in the concept does not reflect what will be on sale two years from now. Instead, it is a gaze into the next decade, using what Renault dubs a ‘one-of-a-kind’ hybrid powertrain using battery electric and hydrogen fuel cell technology to drive a rear-mounted electric motor rated at 215bhp. It is essentially a range-extender using a compact hydrogen fuel cell to recharge the car’s battery, instead of a small petrol engine.

To create this sort of powertrain, Renault has devised what would be a fuel cell vehicle, but with differently proportioned electric and hydrogen elements. Sized at 40kWh, the battery is the same as the one used in the short-range version of the Megane E-Tech electric and is under the front part of the floor. It holds a much larger charge than the small batteries usually used in fuel cell cars, but it’s around half the size and weight of a battery used in a typical long-range EV on sale today.

It can be directly recharged by plugging in at a charging point, but it’s supported by a 15kW fuel cell in the rear half of the floor for top ups away from the plugs. This is fuelled by a high-pressure tank under the bonnet, that’s smaller and lighter than in a conventional fuel cell powered car, making it much easier to package. At 2.5kg it’s half the weight of the tank used to fuel the Toyota Mirai.

Renault claims that beyond 2030 and supported by an adequate hydrogen filling network, a powertrain like this could cover a 500-mile drive with only a five-minute stop to refill the hydrogen tank. There would be no need to charge the battery as the fuel cell can recharge the pack on the move.

Measuring up at 4,490mm long it’s a little bit shorter than the Volkswagen ID.4, and a little bit longer than the Mercedes EQA. Leaning into the more versatile and practical side of the Scenic name, the concept features a wheelbase 2,835mm long within its C-segment sized bodywork – almost 200mm longer than that of the new combustion powered Austral SUV which the Scenic will sit next to in the range. As such, interior space is generous for the car’s size.

Renault has resisted using the electric platform to design a car with an unconventional shape – the Scenic is still a two-box design, though some concept car exuberance is found in the rear-opening suicide doors and the deletion of the B-pillar. Plus large, 21-inch aerodynamic wheels.

The shape and many styling details will only be toned down slightly for production. Head designer Gilles Vidal claims that the angular styling of the Scenic Vision has been inspired by the brand’s diamond shaped logo, while it introduces a whole new lighting signature for the brand designed around this theme. Further touches include illuminated C-pillar lighting and a lit up logo on the taillight. The black paint is a further point of interest – rarely are concepts finished in dark colours, but the black pigment is made using recycled carbon fibres.

Entering the car is done via the press of a touch sensitive Renault logo panel where the B-pillar should be, revealing the future-gazing four-seat interior. The cabin is also where the most obvious elements of the Scenic Vision’s sustainable construction are found, namely the materials used and the composition of the floor, which is made from 100 per cent recycled plastics from food packaging and industrial waste.

No leather is used in the cabin, such is the focus on recycled materials. The space is predominantly white, as a result of the elimination of dyes in the fabrics, which are entirely made from recycled plastics. Some colour is found inside by the use of dichroic panelling. This can split light into distinct beams of different wavelengths, creating a natural rainbow-like pattern of colour that shifts depending on the angle it is viewed from.

Facial recognition software automatically configures the interior to passengers and drivers it recognises, altering seat positions, infotainment preferences, music and more. Four ‘widget’ style small screens take the place of one large central touchscreen and are totally customisable, while the centre of the steering wheel is a display too. In total, ten ‘widget’ displays are dotted around the cabin for control of various functions.