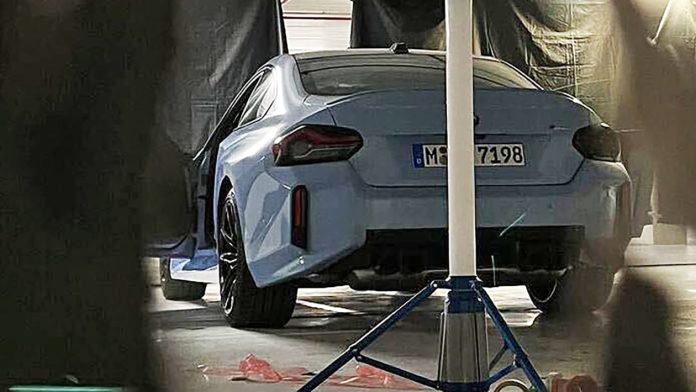 BMW CEO Frank van Meel has confirmed the new M2 will be the last M car to use pure internal combustion, with either hybrid or full-electrification on the cards for the firm’s performance-focused cars.

Speaking to Germany’s Bimmer Today, van Meel said “We will see increasing electrification in other vehicles, of course in different forms, starting with the 48-volt electrical system and plug-in hybrids to fully electric drives. Seen in this way, the M2 will be the last M with a pure combustion engine drive and also without electrification scope such as a 48-volt on-board network”.

Despite the bold statement, we’re still yet to see a fully-fledged M car with an electrified powertrain. The next-generation M5 will utilise the hybrid powertrain from the upcoming XM SUV, and it’s likely it’ll find its way into other larger M cars such as the X5 M and X6 M. It seems from van Meel’s statement that we can expect to see other M cars take on mild-hybrid 48-volt technology, rather than plug-in hybrid or even full electrification.

As for the new M2, it’s been spied plenty of times ahead of its unveiling but we’ve recently seen it in uncamouflaged form in a darkened studio, confirming previous design details found on test cars.

The rear lights look unchanged from the standard 2 Series, but there are some big differences in the bumper with two vertical indents for the rear reflectors (similar to the outgoing M2) and a large cut out at the bottom for a rear diffuser. BMW M’s trademark quad-exit exhaust tips will make a return on the M2 as well. It looks like the launch colour chosen for the M2 is Yas Marina Blue – a hue first seen on the F80 M3.

Last month, BMW revealed an official teaser image of a camouflaged M2 prototype wearing what looks to be some extras from the M Performance catalogue. Firstly, there’s a new rear wing, and secondly, a set of larger wheels which appear to be the forged ‘1000 M’ design currently available as part of BMW’s M Performance parts offering for the M3 and M4. The caption for the post read: “The fine details of driving excellence, waiting to be revealed,” followed by several hashtags including “#MPerformanceParts”.

We saw action shots of the new M2 earlier in 2022, in which the car was photographed from all angles at the famous Nurburgring circuit in Germany. As our spy pictures showed, a disguised version of the near production-ready high-performance flagship had been testing at the fearsome 12.9-mile long circuit.

Due to hit showrooms this year, just in time for BMW’s 50th anniversary of its M division, the new M2 will be based on the recently launched 2 Series Coupe. To reflect its focus on performance, the car gets an aggressive new look.

At the front, there’s a new bumper with a lower splitter and more vents, while the rear end gets an enormous diffuser complete with BMW M’s trademark quad-exit exhaust tips. The side skirts are also lower and there’s a new ducktail spoiler on the bootlid. There’s a wide stance set off with larger wheels than the M240i, while it’s likely that the new M2 will have even wider wheel arches than its predecessor.

The outgoing BMW M2 remains one of the most exciting compact sports cars, while the recent CS version has taken the manual, rear-wheel drive, straight-six formula to another level – although the extra cost is hard to swallow. However, the good news for BMW M purists is that the new one is likely to retain all of the old car’s key attributes, but deliver even more performance.

The previous-generation M2 was a key model for BMW’s M division. Back in 2018, the brand labelled the car as its “strongest growth driver,” so the success of this new model is vital, even though the firm’s portfolio has since expanded to include more popular performance vehicles, such as SUVs and even electric cars.

BMW’s latest M2 prototype isn’t wearing the heavy body cladding of our previously snapped test cars, which gives us a detailed look at the cosmetic tweaks the company’s performance arm have made to the flagship model’s design.

Up front, there’s a new bumper with a lower splitter and more vents, while the rear end gets an enormous diffuser complete with BMW M’s trademark quad-exit exhaust tips. The side skirts are also lower and there’s a new ducktail spoiler on the bootlid.

BMW’s next M2 will take advantage of the fresh platform found under the new 2 Series coupe, which was derived from that of the 3 Series. However, there’ll be significant changes over the powertrains and chassis in the standard 2 Series.

Given the new M2 will be the last M car without an electrified powertrain, it seems probable that it’ll use a straight-six engine – the same format that underpinned many of M division’s finest cars. We expect the latest turbocharged 3.0-litre straight-six petrol engine, found in the likes of the X3 M and X4 M performance SUVs. Codenamed S58, the unit develops 503bhp in BMW’s flagship Competition trim but, so the M2 doesn’t tread on the toes of its larger (and more expensive) siblings, we expect BMW will limit the coupe’s output.

Like the rest of BMW’s M line-up, the M2 will be offered with two power outputs – there’ll be a standard variant at the entry-level and a more potent Competition option acting as the flagship. The M2 base model will have at least 400bhp, which will provide enough breathing space between the M2 and the new M240i xDrive, which produces 369bhp.

That 400bhp output would also give the M2 enough grunt to compete with the current crop of hyper hatches from Audi and Mercedes. The new Audi RS 3 has a 395bhp turbocharged 2.5-litre five-pot petrol engine, while the Mercedes-AMG A 45 S offers 415bhp.

However, unlike those cars (and indeed the M240i), BMW is expected to keep the M2 rear-wheel-drive only, rather than adopting the rear-biased four-wheel-drive system from the new M3 and M4. Purists will also be glad to hear that a six-speed manual gearbox will also be available alongside the usual eight-speed paddle-shift automatic.

The M2 Competition will have a bit more power still, possibly edging towards the 430bhp mark if BMW mirrors the gap between the standard and Competition versions of the M3 and M4. The brand may even produce a replacement for the track-focused 444bhp M2 CS, which was the most powerful road-going M2 so far.

To control the extra power, BMW will make a few changes to the platform. The firm engineers will widen the coupe’s track, add some extra braces to reduce chassis flex, bolt on some larger brakes and fit an M Sport rear differential as standard.

The suspension will be upgraded, too – and the brand’s engineers have two options to pick from here. Choices include the firm’s stroke-dependent mechanical dampers, tuned to match the M2’s stiffer and wider chassis, or M Sport adaptive electromechanical dampers.

As well as gaining a new exterior design compared to the M240i, BMW will alter the M2’s interior design to distance the car from its more mainstream sibling.

Our spy photographers have also seen inside the new M2, revealing that BMW will equip the coupe with its latest Curved Display iDrive set-up. That means the digital instruments and infotainment screen are joined together in one seamless display.

The rest of the cabin will get BMW’s classic M division touches, such as supportive bucket seats and a new sports steering wheel with two bright red M mode buttons, allowing the driver to quickly switch between two individually configured vehicle set-ups.

BMW isn’t expected to launch the new M2 until the end of 2022, and the car might not reach UK showrooms until the beginning of 2023, so pricing details still haven’t been confirmed.

Despite this, prices for the M2 Competition (which is the only model we’ll get here in Britain) are expected to start from around £60,000. That means the coupe will be able to compete with sports coupes such as the Porsche Cayman, as well as the new Audi RS 3 hyper hatch.