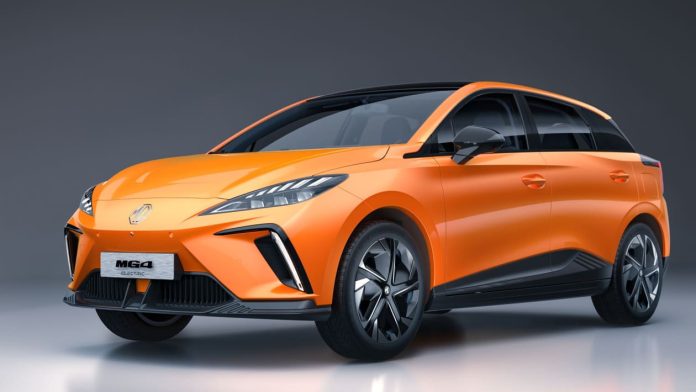 This is the latest all-electric member of the growing MG line-up: the MG 4. As a zero-emissions hatchback it poses a cut-price threat to the likes of the Volkswagen ID.3 and Nissan Leaf.

Recently revealed in Chinese specification as the MG Mulan, the model destined for Europe is currently undergoing final testing for the region, and wears the MG 4 badge. Its arrival on the European market is confirmed for Q4 2022 and UK sales should commence early in 2023.

Despite the ever growing importance of SUVs to carmakers, cars the size and shape of the MG 4 remain hugely popular in Europe. Underlining the MG 4’s status as a key player in MG’s continued all-electric assault, it’s the brand’s first model to be produced on an new, bespoke electric platform called Modular Scalable Platform, or MSP, which will form the backbone of the next generation of electric MG models.

The car was originally leaked by Chinese patent images, but our first official look at the MG 4 reveals a vehicle that’s right in the sweet spot of the C-segment hatchback market. At 4,287mm long, 1,836mm wide and 1,506mm tall, it’s exactly the sort of size buyers in the family hatchback class come to expect.

It looks quite unlike any other member of the current MG line-up, using a new design language. A relatively pointy front end is marked out by slim and sharp looking LED headlights, while at the rear a full-width LED taillight bar sits beneath the screen. Some SUV-inspiration is found in the tougher looking cladding running at the bottom of the doors, and the top of the hatch lid is crowned by a split-design rear spoiler.

Inside, the use of the new MSP platform appears to unlock more interior space through its removal of the transmission tunnel. A floating style centre console is home to a rotary drive mode selector and an electronic parking brake, while a large central touchscreen takes pride of place on top of the dashboard. A compact digital instrument panel sits behind a new-look, two-spoke multifunction steering wheel.

MG says that the MSP platform is key to being able to create a low-slung electric hatch like the MG 4. This is thanks to the packaging of the two battery options – both just 110mm thick – under the passenger cell. Combined with the modularity of the MSP system – which can accommodate cars and vans with wheelbases ranging from 2,650mm to 3,100mm (think family hatchbacks to full-size SUVs) – battery packs this thin, ranging from 40kWh to 150kWh, can be equipped.

In the case of the MG 4, two battery sizes are offered. A base car using a 51kWh underfloor battery will allow a range of up to 217 miles on a full charge, according to WLTP certification. But a longer range model with 64kWh will allow up to 280 miles before it needs plugging in. A single electric motor develops 167bhp in the base car and 201bhp in the 64kWh model, enabling 0-62mph in under eight seconds. Top speed is limited to 99mph.

MG has confirmed that the MSP platform can host all-wheel-drive electric powertrains and a further development of the MG 4 with a dual-motor system is in the pipeline. Charging specifications have not been announced, but the MSP is currently a 400v architecture that can be upgraded to 800v for faster charging ‘in the future.’

Prices and specifications have not been confirmed, and a more exhaustive equipment list will be published closer to the car’s order books opening towards the end of the year. But don’t expect the new MG 4 to cost far off the circa £28,000 of the electric MG ZS SUV when it lands this winter.

“Politicians have to change their motorist-loathing ways”